Often, SCCM administrators found packages still assigned to distribution points that no longer exist. There are scripts available to remove these “orphaned” package distributions via SMS Provider. i.e. This one called DPClean.vbs from TechNet Blog: Removing a retired DP from all your packages. It was written for SMS 2003.

Use my test environment at home as an example to explain the issue with this script in SCCM 2007:

I created a package called “Configure Windows Firewall Service” on my central site CEN. The Package ID is CEN00013:

This package has been assigned to 2 distribution points:

Notice that there is a pad lock symbol next to ConfigMgr01. If you right click \MGMT02\Packages$, there is a “Delete” option: 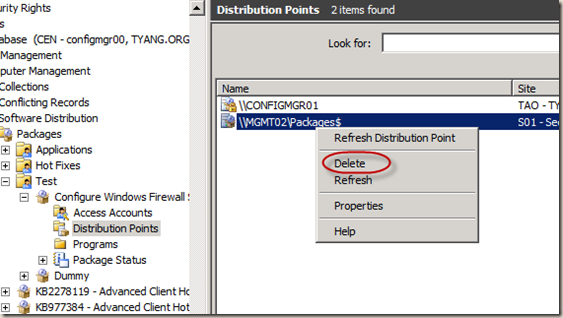 When right click CONFIGMGR01, “Delete” option is not available:

This is because even though the package was created on the central site CEN, but this package was assigned to the DP CONFIGMGR01 on the child primary site TAO.

If I get to the package on Child Primary site TAO, there is no pad lock on CONFIGMGR01 and the “Delete” option is available: 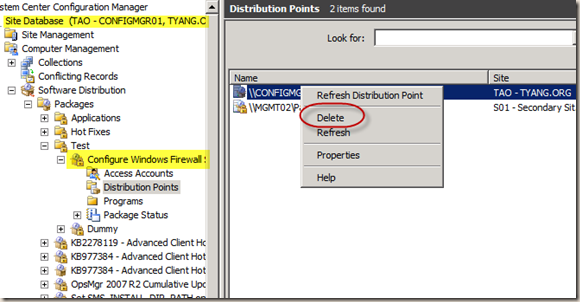 If I use the same way as DPClean.vbs (only in PowerShell this time): 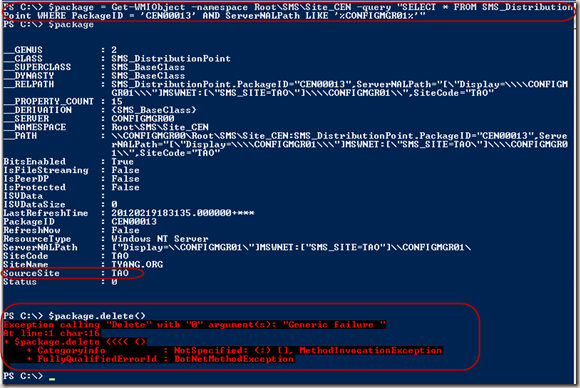 I Firstly locate the package distribution from the central site CEN’s SMSProvider, then use delete() method to remove it, I get a “Generic failure” error.

Notice that the properties of the package distribution object, the SourceSite value is “TAO”. it means the package was assigned to the specific DP from site “TAO”.

Now, if I repeat above PowerShell commands on site “TAO”: 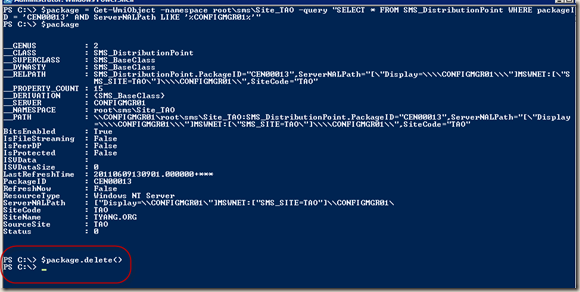 No errors returned as it was successfully deleted.

Now, on the SCCM console: 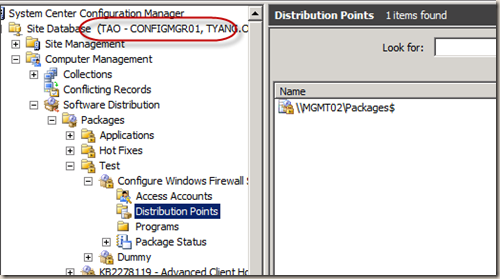 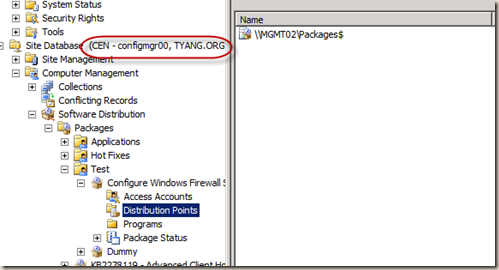 The DP was deleted on both sites.

In conclusion, no matter which method is used (either via GUI or via SMS provider), the package can only be removed from a DP on the site where it was distributed.

I am also facing the issues around how the SCCM environment is operated at work. we have around over 1000 branch DPs across multiple primary sites. These branch DPs often get decommissioned or rebuilt (not by people who manage SCCM). the people who decommission these Branch DPs do not have knowledge on how SCCM environment is setup. I would not expect them to correctly enter the SCCM site server name when running the script.

Therefore I’ve re-written the script in PowerShell. The only parameter this script requires is the name of the distribution point (can be a normal DP, a DP that’s a Server Share or a Branch DP).

How the script works:

An Issue with the script:

While I was testing the script, I did find an issue (not sure if the issue is with the logics of the script or, with SCCM itself).

I ran the script to delete all packages off a DP located on my secondary site S01. at that time, there were 3 “Install_Pending” packages against this DP. there were assigned to this DP from the central site CEN. The script ran successfully, deleted all packages on this DP from each package distribution’s source site, including these 3 “Install_Pending” packages (from CEN). However, when double check again, these 3 packages still exist in S01’s primary site TAO’s database. So, the deletions have not been replicated from central site CEN to child primary TAO.

This is why I configured the script to display instructions on how to remove them from site database (unsupported way).

The script can be downloaded here: Clean-DP.PS1

*Note: This script DOES NOT remove the actual packages from the hard disks of distribution points. The script does not actually connect to the DP at all. it can run AFTER the DP is decommissioned.

Please do not hesitate to contact me if you have any issues or questions about this script.