Back in August / September last year, I spent sometime designed a set of Orchestrator runbooks to migrate Window Server 2008 R2 Hyper-V clusters to Windows Server 2012. I wasn’t going to blog this because it was designed to only cater for my company’s environment, not something that’s generic enough for everyone to use. I also wasn’t sure how well I can explain and document these runbooks in a blog post. Few of my colleagues and friends actually encouraged me to blog this one so I’ll give it a try (and not to disclose company related sensitive information).

My employer is one of the biggest two supermarkets and retail chains in Australia. Few years ago, there was a project that implemented a 2-node Windows Server 2008 R2 Hyper-V cluster in each of the 750 supermarkets that owned by my employer. More details about the implementation can be found from this Microsoft Case Study.

I have been in my current role for just over 2.5 years now, one thing that I learnt while managing a large retail environment is, that Automation is THE key to our success. No matter what solutions you are planning to rollout to the stores, if you can’t automate the rollout process, your plan is not going to fly. Therefore scripting is pretty much the essential requirement for everyone in my team. And in the office, you hear the phrase “cookie cutter” a lot. Automation standardise and simplifies implementation processes for new technologies. Our job is pretty much to design all kinds of cookie cutters and hand them over to other teams to cut cookies.

For the Hyper-V cluster upgrade, our end goal is that the implementers would enter a store number in the System Center Service Manager 2012 web portal and Service Manager would then kick off a series of Orchestrator runbooks to perform the upgrade. The upgrade would involve the following steps:

I have been asked to assist to design a prototype for step 3 using Orchestrator 2012.

Note: At the time designing this prototype, Windows Server 2012 R2 and System Center 2012 R2 was yet to be released and we had not made decisions to go straight to R2. Therefore my prototype was based on the scenario that we were going to migrate from Windows Server 2008 R2 to 2012 RTM. I had to make some modifications once we have decided to go to 2012 R2. I’ll explain it later in this article.

I firstly scripted the entire cluster migration process in PowerShell, using WinRM and Windows Server 2012 Server Migration Tool. Once the PowerShell script was working 100%, I then broke it up into many small segments and build the Orchestrator runbooks based on this script.

The purpose of this blog post to document my experience designing this prototype. I will provide the runbooks export at the end of this article. 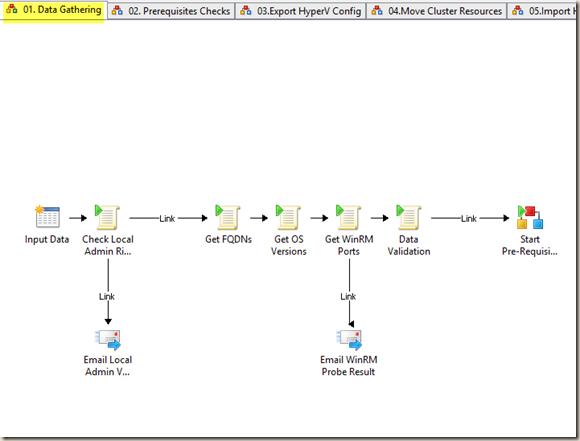 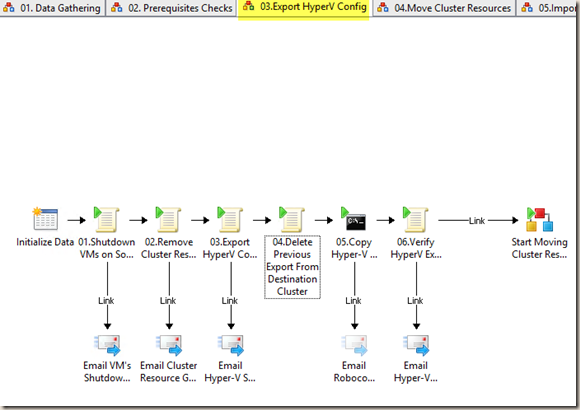 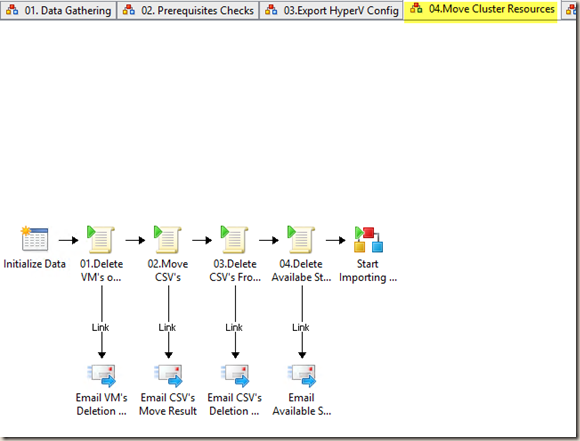 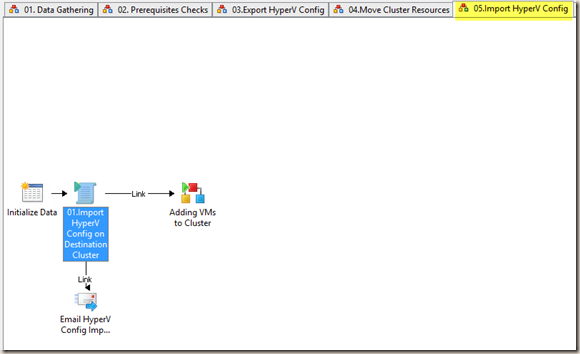 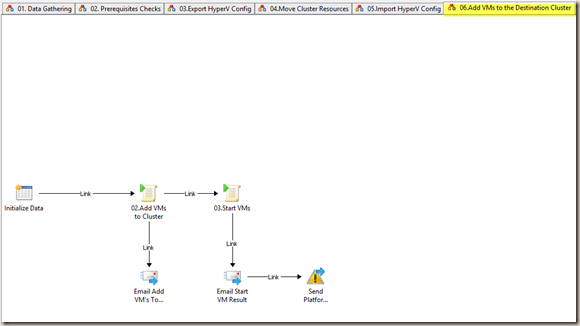 These runbooks require the following prerequisites:

The purpose of the first runbook “Data Gathering” is to connect to both cluster nodes and gather few information for the subsequent runbooks. The only information that the operator needs to provide is the server names for both nodes. 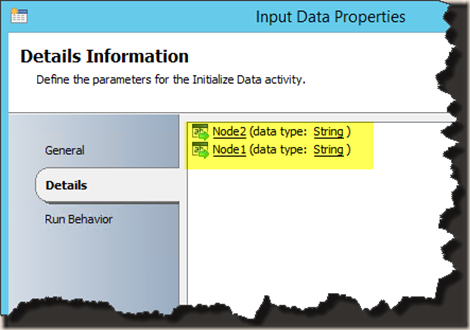 It doesn’t matter which node is node 1 and which one is node 2, the runbooks will figure out the source and destination clusters by comparing the OS versions.

The very first step for runbook 01 is to check if the account it’s running under has local admin rights on both clusters. It will only continue of if it can connect to the admin$ share on both clusters.

This runbook will also get the FQDN, OS versions, WinRM ports from each cluster. With regards to WinRM port, because VMM 2008 and VMM 2012 use different WinRM ports when installing VMM agents on the Hyper-V hosts, so in order for other runbooks to connect to each Hyper-V cluster, we need to know which port to connect to (in 2008, port 80 is used and in 2012, it’s the default port of 5985).

This runbook performs the following checks:

If step 6 (Smig Feature Validation) failed, Step 7 to Step 10 are performed to configure Smig on both clusters:

Note: for all file copy activities in my runbooks, I couldn’t run them within a Powershell remote session because I am not using CredSSP in my runbooks so I can’t connect to a remote UNC path within a PS remote session – because of the second-hop constraint. Therefore I’m simply running the robocopy command: 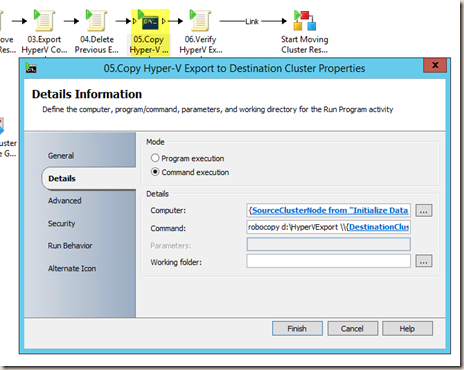 I remember I read somewhere that Orchestrator uses PsExec.exe under the hood when running a command against a remote computer. PSExec.exe uses RPC rather than WinRM.

06.Verify HyperV Export Copy on Destination Cluster – after the Hyper-V export has been copied to the destination cluster, this runbook verifies the export files by comparing the file count between the copies located on the source and destination locations. if this validation is passed, the next runbook is then triggered.

now that we have all the darts lined up, it’s time to import the Hyper-V configuration to the destination cluster. This runbook only contains one activity:

06. Add VMs to the Destination Cluster

when we tested this prototype in our lab, with 3-4 VMs hosted on the cluster, These runbooks took around 10-15 minutes to run. – And all the wait I hardcoded in my scripts contributed to this time frame as well. It is completely automated, all we did was to enter the NetBIOS names of the 2 cluster nodes to kick off the first runbook, and sat back, watching Orchestrator to progress with each activity.

So I finished the prototype by the end of September last year and went on holidays for 4 weeks. Windows 2012 R2 was released while I was on holidays. After I came back, my colleague told me these runbooks didn’t work when migrating from Windows Server 2008 R2 to 2012 R2. because Server Migration Tool only supports migrating from n-1 version when come to Hyper-V. When creating the 2012 R2 version of the smig package for 2008 R2, Hyper-V is not available. However, migration from Windows Server 2012 to 2012 R2 still works using this runbook prototype (because it’s only 1 version behind).

Microsoft advised there is an unsupported undocumented way to make Hyper-V available in the package but we have decided not to use this method because it’s not supported.

After logged a support call with Microsoft and they have advised to just import the Hyper-V VM’s (the xml) to the new cluster. So I spent another couple of hours to modify the existing runbooks to ditch Server Migration Tool and directly import the VM’s XML into Hyper-V. This has made the runbooks simpler than before, but the drawback is that other Hyper-V settings such as virtual switches are not migrated across. Luckily since we have cookie cutters for everything, it’s a no brainer for us to make sure the Hyper-V host servers base build includes the virtual switches creation.

I handed the prototype to some other people and they have then spent few months enhancing it and built the rest of the store upgrade / conversion process based on this prototype. I can’t really disclose too many details about this (at least not at this stage). It has now grown to a monster with many runbooks and integrated with few other System Center 2012 products.

The purpose of this post is to share my experience of designing this specific “cookie cutter” prototype. I hope this would help someone when performing similar kind of tasks.

Both versions of the runbooks can be downloaded from the links below:

Note: I have removed all the email activities from the runbooks exports from the links above.

Just another quick note about the runbooks – When I created these runbooks, I created a folder called “HYPER-WEE”, as a joke. After all the runbooks were finalised, I realised it’s too hard to rename this folder because it’s hardcoded in each Invoke Runbook activity: 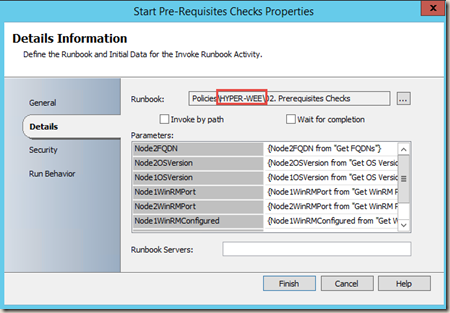 I didn’t bother to rename the folder and update all the runbooks. So if you have downloaded and imported the runbook, you’ll see it: 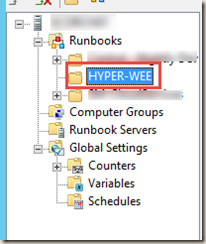 Lastly, as always, please feel free to contact me for any questions or issues.