I’m currently working on a management pack that I’m hoping to be released to public very soon. In one of the workflows in the MP, I got an error logged in the Operations Manager event log on the target agent:

The PowerShell script failed with below exception 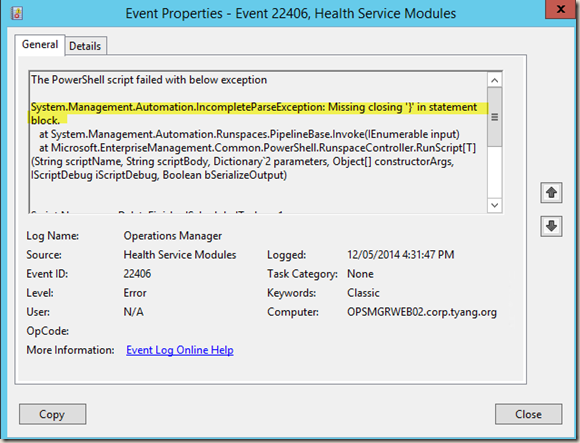 Needless to say, the script runs just fine manually on the agent, so it is bug free. Took me a while to day to figure out what the issue is.

The last line is commented out, I’d uncomment it when test run it in powerShell prompt on an agent. When the MP is built in VSAE, it looked like this:

It’s on the same line as the CDATA close tag. After I started a new line at the end of the script, the MP started working:

From now on, I’ll remember to end the PowerShell script with an empty line. Interestingly, another VBScript in the MP doesn’t have this issue…