For me, and the project that I’m working on, this is a perfect timing, UR2 was release right before we production transitioning our newly built OpsMgr 2012 R2 management groups and we are just about to start piloting, so I have quickly patched all OpsMgr 2012 R2 management groups with UR2 and from agents point of view, UR2 would now become part of our baseline (for now).

I have determined that the best way for me to incorporate UR2 agent updates to the current agent application in ConfigMgr is to somehow “Slipstream” the update into the agent install. This is due to the size, nature of the environments, and the release management and patch management policies that I can’t comment on.

When I said “Slipstream”, OpsMgr 2012 agents UR updates can’t really be slipstreamed into the agent install msi. So what I have done is to create an application in ConfigMgr that will install the agent AS WELL AS the update.

I’ll now go through the steps I took to setup the ConfigMgr application object.

Note: The steps I took are largely the same as the Part 2 of the original post. I will only go through the changes I have made based on the original package rather than documenting it again from scratch.

Note: Please ignore the other 3 scripts in the above screenshot, they were from the 2007 package I created in the original blog post Part 1. They are not required here.

Remove “\AMD64” from the end of the content location field. 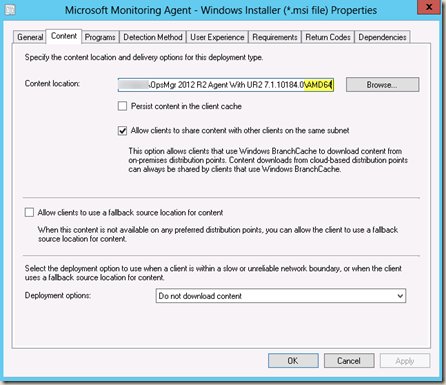 Change the installation program from the “msiexec /i ….” to Cscript /nologo CM12_OM12AgentInstall.vbs “64-bit” 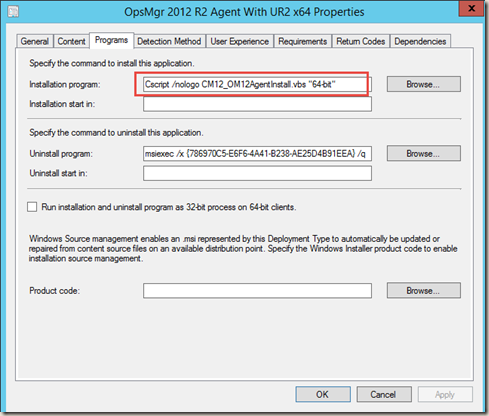 Remove “\i386” from the end of the content location field and change the installation program to Cscript /nologo CM12_OM12AgentInstall.vbs “32-bit”

The script used for the installation basically installs the MOMAgent.MSI and then UR2 agent update. It can be modified for installing other previous and future agent UR updates by changing the file names on line 59 and 64

When the application is deployed to a ConfigMgr client, the script creates few log files under C:\Temp: