This is the 3rd part of the blog series. I have covered my home network setup using Ubiquiti Unifi devices in part 1, and Xiaomi home automation products in Part 2. In this part, I will discuss my experience with Google Home and Sonos products. It’s been over a month since the last part, this is because I was waiting for Google Home Hub to be released so I can get my hands on it and included it in this post.

Currently, I have 1 full size Google Home, 6 mini speakers as well as 2 newly released Google Home Hub (7 inch display) throughout the house – one in each room. i.e.

In my office next to the Sonos Beam: 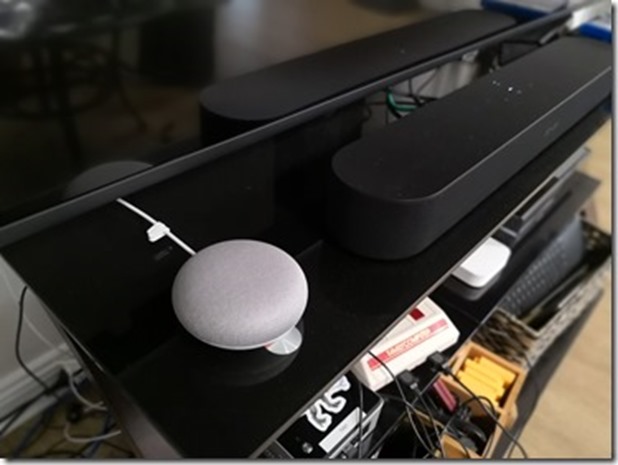 Also in my office, on my desk under a 27 inch monitor: 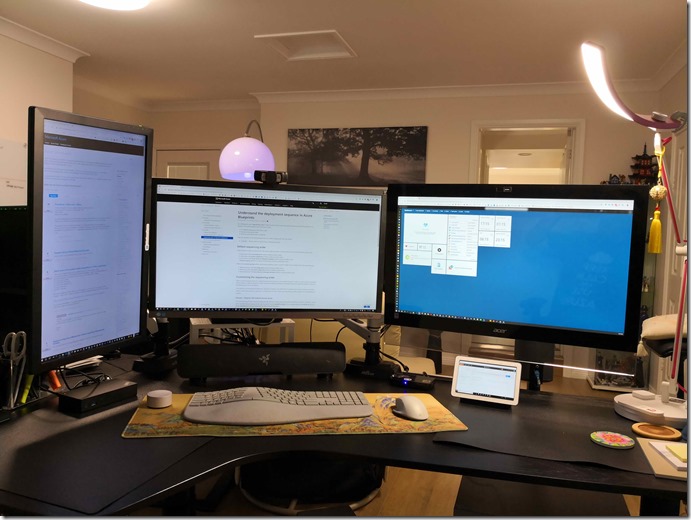 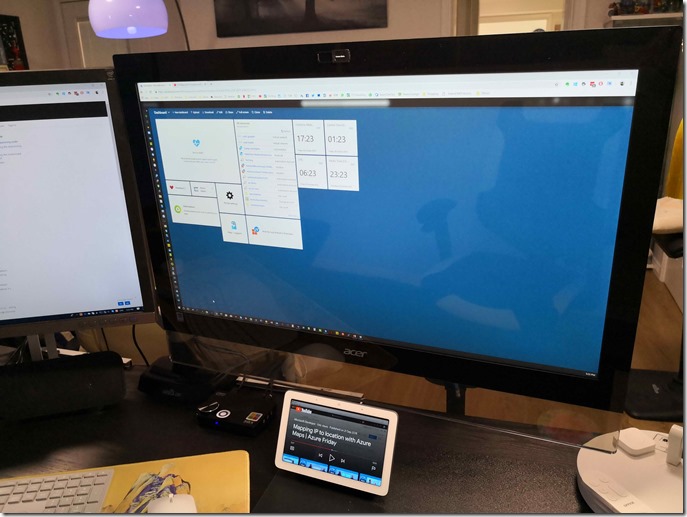 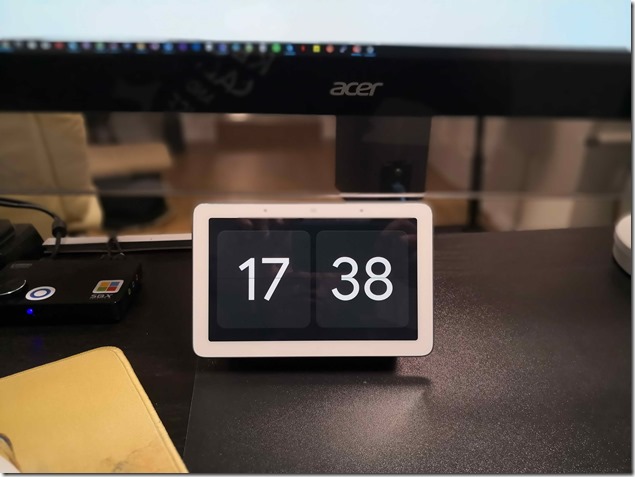 In the living room, placed on top of the digital piano, next to a Sonos Play:3: 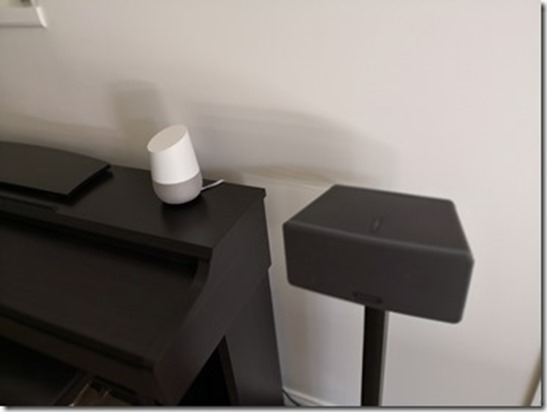 In the kitchen next to a Honeywell LPG gas detector (part of the Xiaomi suite): 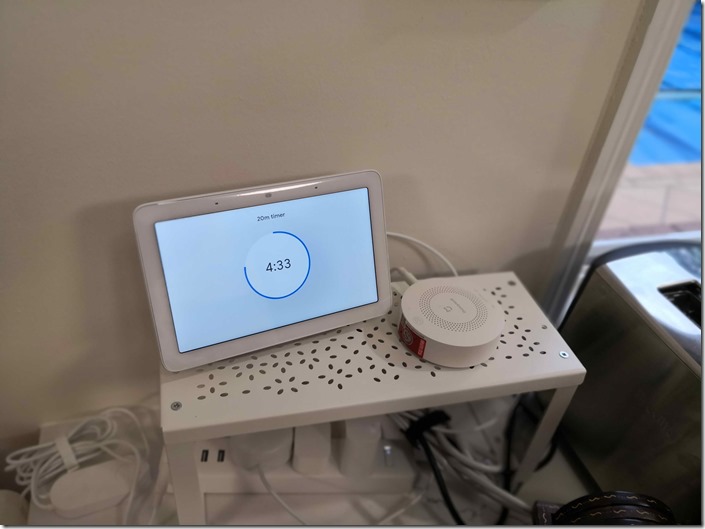 In my daughter’s study next to a Xiaomi Wifi security camera: 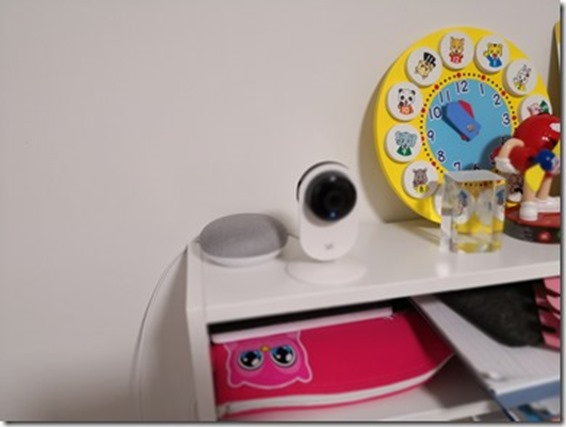 In the rumpus room on top of the AV receiver: 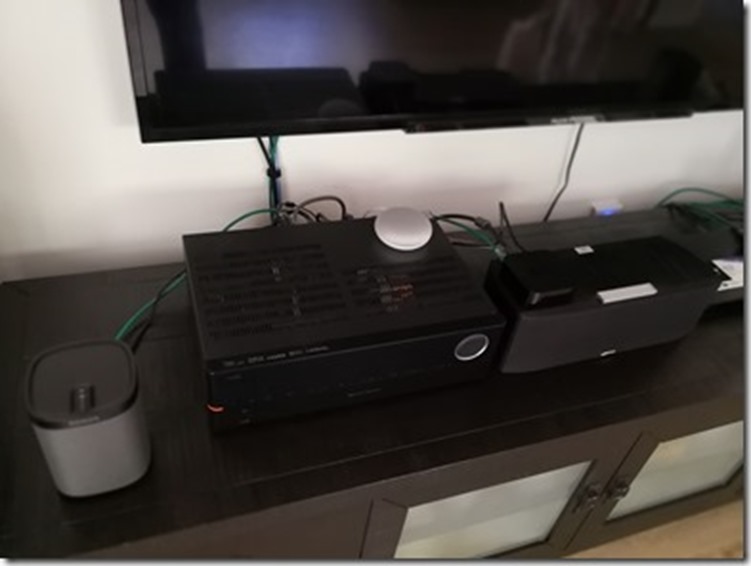 As you can see, they don’t take too much room at all. since they are WiFi connected, you can place them anywhere that has good WiFi signals. To me, this is not a problem since I already have 7 Ubiquiti access points installed in the house. With Google Home, you can voice train the speakers so they know who’s speaking to them. i.e. if my wife is asking Google Home speakers what’s her schedule like for today, it is not going to tell her my schedules.

There are many integration capabilities that Google Home provides natively. i.e. Xiaomi’s Mi Home, Yeelights (part of Xiaomi’s suite, what I’m using at home), plus hundreds more. It also supports IFTTT, so if you want to, you can build your own solutions.

I have to say, I’m really amazed with the sound quality of these speakers. even the Google Home Mini can be so loud, there is no issue using it in a large room at all (my office is around 40 square metres, even a mini speaker is more than enough).

Although it’s cool to interact with Google and control everything using voice commands, sometimes, it would be cool to have visual. With the recent introduction of Google Home Hub, I went to my local store and bought 2 at the very first day.  Initially I’ve been waiting for the Lenovo Smart Display for Google Assistant to be released in Australia, then few weeks ago after I watched Google’s announcement for Google Home Hub, I changed my mine. The Lenovo 10 inch Smart Display is too bulky for me, and the price down here is AUD $399. Google Home Hub is more compact, only 7 inch, and price is only $219. So for the price of 1 Lenovo Smart Display, I can almost get 2 Google Home Hubs. Having said that, Lenovo Smart Display comes with built-in camera, whereas Google has decided not to include cameras for security reasons. Since I don’t need a camera – in fact, I have privacy covers for all my webcam, tablets, laptops, etc., it didn’t bother me at all.

I placed one Google Home Hub on my desk, because that’s where I spend most of my days. The other one is placed in the kitchen (it had a mini speaker there before). Kitchen is where we as the family spent most of our time, it’s where my wife and daughter use Google Home the most. With Google Home Hub, you can:

When I’m working, I like to play YouTube / Netflix on the background. Now I can stream my preferred content from YouTube on the Google Home Hub on my desk so I can free up a monitor for other things (although I already have 3 monitors

Despite all the good stuff it brings, there are few things I hope Google Home can improve:

I am a big music fan, more specifically, I love Heavy Metal. Over the years, I have spent a lot of $$$ on headphones, especially Sennheiser headphones. Most of my headphones are Sennheiser’s. Few years ago I started investing on Sonos speakers. Initially I bought a Sonos Play 1 to test it out, and soon after that, I had 2 Sonos Play 1 pairs, and a Sonos Play 3. Recently, when Sonos released Sonos Beam, I bought one and connected to my Office TV. I also placed 2 Sonos Play 1 speakers behind the chairs and set them up as surround sound speakers. 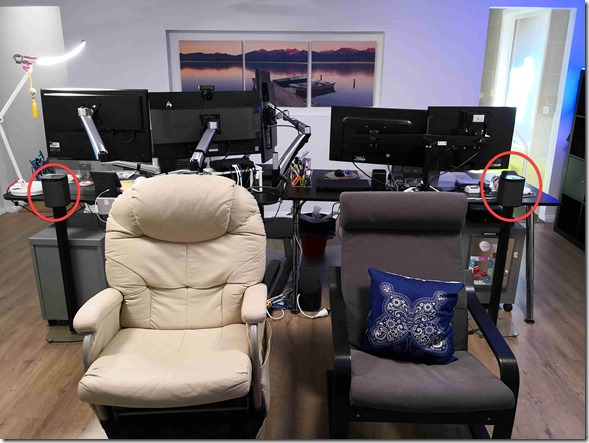 In my opinion, although this setup is still not as good as the proper 5.1 setup I have in my rumpus (with Harman Kardon receiver and Jamo speakers), it is more than good enough for my office. Its hard to describe the sound quality with words, but even when I turn the volume to the max and play heavy stuff such as Rammstein, Without the subwoofer, there is already enough bass that I can feel the floor vibrating. My next purchase would probably be a subwoofer for my office.

When I started using Sonos few years ago, I setup my speakers wirelessly without using the Sonos Wifi extender Boost. I found some of my speakers constantly drop out, even when it’s placed directly under my Ubiquiti Unifi Access Point (around 1 metre away). Since I have ethernet data point all over the house, I didn’t bother getting a Boost, but hardwired all my speakers using Cat 5 cables. This has improved my experience dramatically – no more drop out, and no more speakers out of sync. So if you have data points near where you want to place your Sonos speakers, I’d strongly recommend you to use wired connection instead of Wifi.

Unlike many other Sonos users, I don’t use them to stream from an online music provider (i.e. I found $12/month for a Spotify membership is a rip off). I only use them to play from my local MP3 library (few hundred GB). This worked great, except 2 years ago, I noticed Sonos only spports SMB v1. I raised it in their online community: https://en.community.sonos.com/setting-up-sonos-228990/sonos-support-for-smb-2-0-protocol-6739642, 2 years have passed, I don’t think they have updated their app to support SMB v2 and v3 yet. Originally, my MP3 library was hosted on my Windows PC. Since I noticed Sonos’s lack of support, I have moved my music library to a NAS share so I can make my Windows 10 machines more secure by turning off SMB v1.

I love the sound quality that Sonos brings. if you ask me what I’d like to see from Sonos other than SMB v3 support, I’d say, I desperately want Google Home integration, and it would be great if they can release some weather proof POE outdoor speakers so I can extend my setup to my backyard – right now, the only way to do this is using Sonos Amp together with 3rd party outdoor speakers.

This concludes my 3-part blog series on Home Automation. Please feel free to share your story with me, I like new ideas. My next plan is to explore in Azure IoT Dev Kit and Raspberry Pi, and see if I can make something useful in the context of Home Automation.