Recently, GitHub has released an open-sourced tool called Super Linter (Blog, Repo). It’s basically a swiss army knife of linters for a collection of languages. This is really cool since I can replace many language-specific tests with a single tool. At the time of writing this article, it already supports many popular languages such as Dockerfile, Golang, JavaScript, JSON, Markdown, YAML, Python3, PHP, Terraform, PowerShell, bash, and many more. The full list is documented on the README file on the GitHub repo.

Although the GitHub Super Linter is designed to be used in GitHub Actions, it runs on a container under the hood, and it allows you to run locally using docker. This capability enabled me to use it as part of my Azure DevOps pipeline (or potentially any other CI/CD tools).

It is really easy to incorporate it in your Azure Pipelines. I added it to one of my existing pipelines and replaced a task that runs PSScriptAnalyzer, and it worked the first attempt. Assuming you are using YAML pipeline, here’s the code snippet:

the syntax for running the Super Linter container is documented on it’s GitHub repo: https://github.com/github/super-linter/blob/master/docs/run-linter-locally.md. In my example, I’m scanning everything in $(System.DefaultWorkingDirectory) (which means everything in my git repo). You can adjust it according to your requirements.

If any issues are found within your code, the task will fail, for example: 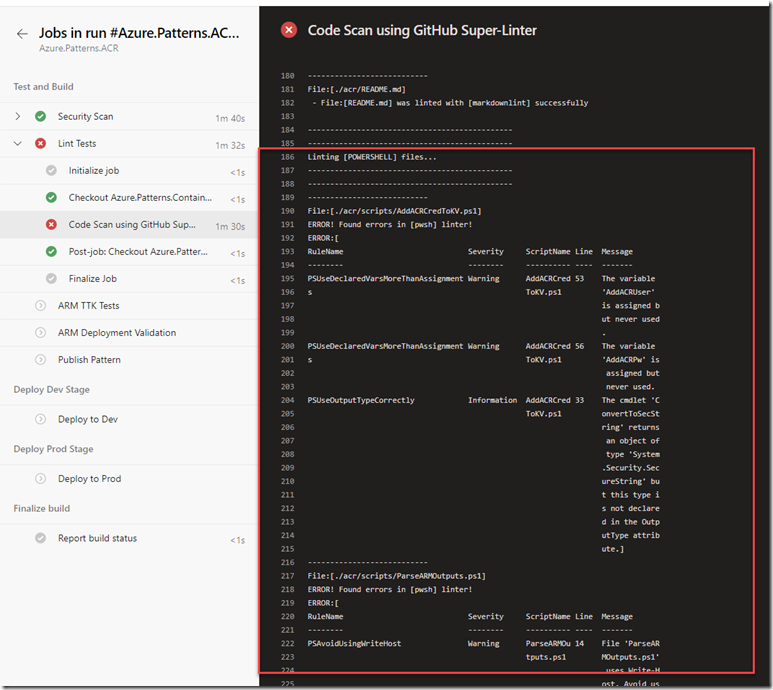 For most of my pipelines, if there are ARM templates involved, I’m also using ARM TTK to validate them. I hope one day ARM TTK makes it’s way to GitHub Super Linter, but since it’s open sourced, I might try to figure out how to do it myself if I can find spare time.

But for now, I’m pretty happy with the result, it’s so easy to use it in Azure Pipelines, I encourage everyone to give it a try.