Azure Bicep has recently reached an important millstone when version 0.3 was announced. v0.3 is now officially supported by Microsoft support plans and it’s on parity with ARM templates.

Azure Deployment script has been on my to-do list for blogging for a long time. I have listed a number of valid use cases where Deployment Scripts makes perfect sense. Now that Azure Bicep is officially supported by Microsoft and the language syntax should be more stable from now on, I think it’s logical for me to cover these use cases in Bicep.

The use case I want to cover today is deploying custom Role Definitions. A role definition is made up from the following parts:

Now to do this natively using only ARM templates (or Bicep in this case), I was able to create 2 simple deployment scripts within my template to cover both new and existing scenarios.

NOTE: the source code of this example solution is located in my GitHub repo.

Here’s the logical flow for my template:

pre-requisite: A user assigned managed identity with required permissions to create role definitions for all the subscriptions I want to manage. In my lab, I assigned this identity Owner role on the tenant Root management group level. This managed identity is required for the deployment scripts.

To achieve what I need to do, I must use a subscription level template with nested templates due to the following reasons:

As you can imagine, this template can be really complicated to develop using ARM template. Luckily now that with the support of modules in Bicep, I can split them into different bicep files, and each nested template becomes a module in the main Bicep template. The overall authoring experience has become a lot more pleasant. My main.bicep file has only 70 lines: 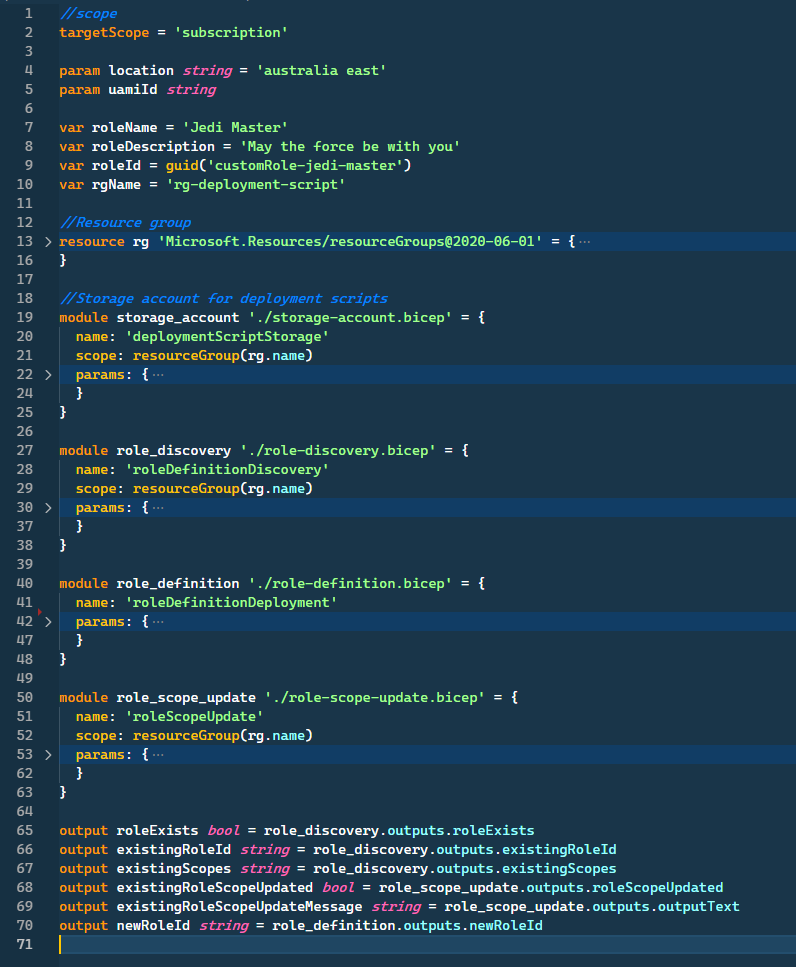 The 1st deployment script (for existing role discovery) is defined in role-discovery.bicep.

The 2nd deployment script (for modifying existing role definition) is defined in role-scope-update.bicep.

The actual role definition is defined in role-definition.bicep.

both scripts are using Azure PowerShell and connect to my Azure environment using the managed identity I created previously.

As you can see, the resource blocks in role-definition.bicep and role-scope-update.bicep both have a condition defined. They both use the an input parameter called roleExists in the condition, which is the passed in to the module with the value from the output of the first role discovery deployment script:

At the time of writing this article, I still find the Azure CLI support for Bicep is a little bit buggy. Somehow I got some exceptions when tried to directly deploy the bicep files, but the same template deployed successfully when I complied bicep to ARM template first (using bicep build main.bicep command). I am not sure if this is just me, but I ended up switched back to Azure PowerShell and deployed the ARM template that the bicep build command generated, it ran for few minutes, and when I tried to deploy the definition to a subscription which is already in the AssignableScopes, instead of overwriting the existing definition, the template deployment simply did not make any changes. This is the output I received from the template deployment:

This is all I have for today. I will try to cover more use cases for Azure Deployment Scripts in the future.

If you haven’t used Azure Bicep, I strongly recommend you to give it a try. I can guarantee you that you will not want to go back to writing ARM templates once you’ve tried Bicep.