This is the 20th installment of the Automating OpsMgr series. Previously on this series:

OK, it has been 6 months since my last post on this blog series. I simply didn’t have time to continue on, but I know this is far from over. I am spending A LOT of time on OMS these days, some of you guys may have heard (or have already read) our newly published book Inside Microsoft Operations Management Suite (TechNet, Amazon). I’m hoping you guys all have played with OMS and maybe even have started thinking what workloads can you move to OMS.

As we all know, we can pretty much categorise SCOM data into the following 4 categories:

Unlike SCOM, since OMS does not use classes, there are no classes, relationships and state data in OMS, but for the other 3 types, we can easily get them over to OMS. With the SCOM alert data, you can simply enable the Alert solution after you have connected your SCOM management group to your OMS workspace. OMS also has its own alerting and remediation capability. For all existing performance collection and event collection rules, we can easily recreate them using a different Write Action module to store these data into OMS. In this post, I will show you how we can gather all performance collection rules from an existing OpsMgr management pack, and re-create these them for OMS (stored as PerfHourly data in OMS). But before we diving into it, let’s quickly go through the performance data in OMS.

Since an OpsMgr rule can only have up to one (1) condition detection member module, converting existing OpsMgr perf collection rules that already have an existing condition detection member module to OMS NRT perf rule may not be that straight forward. In this case, we may need to create some additional module types and things can get very complicated. It is certainly not something that we can use a generic script to achieve.

Therefore in order to make the script work with any existing OpsMgr performance collection rules, I have chosen to store the perf data in OMS as PerfHourly data because it has far less “red tapes”. Having said that, please keep in mind it is still possible to re-create OpMgr perf collection rules as OMS NRT perf collection rules, but it’s just not something we can develop as a generic automated solution.

If you want to learn more about performance data in OMS, or how to author OMS based collection rules in SCOM using VSAE, please refer to Chapter 5: Working with Performance Data and Chapter 11: Custom Management Pack Authoring of the Inside OMS book I mentioned in the beginning of this post.

In the previous posts of this blog series, I have simply placed the scripts / runbooks within the post it self. I have decided to use Github from now on. So the script Copy-PerfRulesToOMS.ps1 can be found in one of my public Github repositories: https://github.com/tyconsulting/OpsMgr-SDK-Scripts/blob/master/OMS%20Related%20Scripts/Copy-PerfRulesToOMS.ps1

This script has the following pre-requisites: 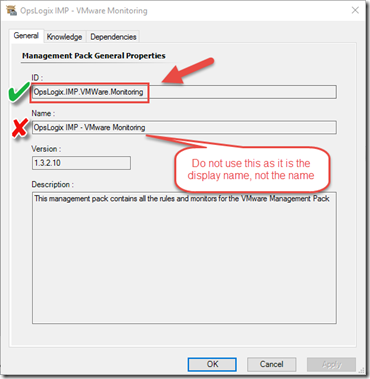 I have added many verbose messages in the script, so you can use the optional –verbose switch when executing the script. 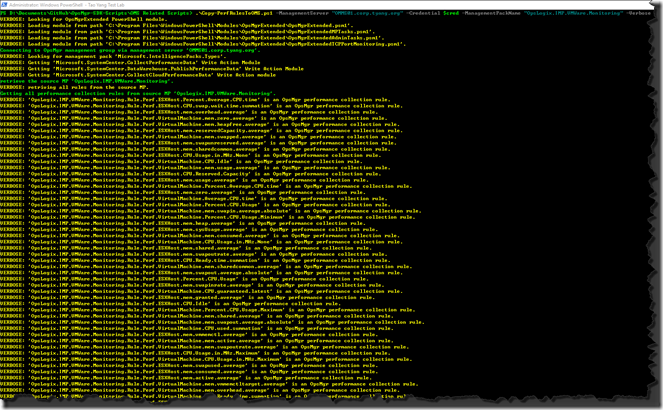 When the execution is completed, you will see a new unsealed MP created in your management group: 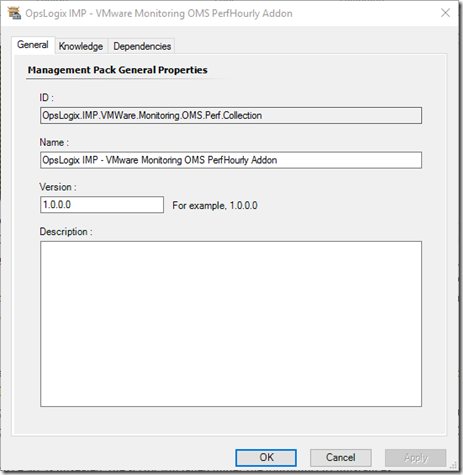 and if I export it to XML and open it in MPViewer, I can see all the newly created OMS PerfHourly collection rules: 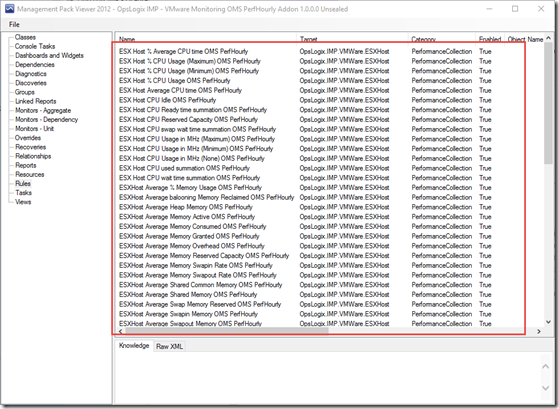 At this stage, I don’t need to do anything else and all the performance data collected by the source MP (OpsLogix VMware MP in this example) will be stored not only in OpsMgr, but also in OMS.

Because the original OpsMgr perf collection rules and the co-responding OMS PerfHourly rules are sharing the exact same data source modules with same configuration, this would not add additional overhead to the OpsMgr agents due to the OpsMgr Cook Down feature. However, please keep in mind that from now on, if you need to apply overrides to the either rule, it’s best to apply the same override to both rules (so you don’t break Cook Down).

Although the PerfHourly data will not appear in your OMS workspace straightaway (due to the aggregation process), you should be able to see them within few hours: 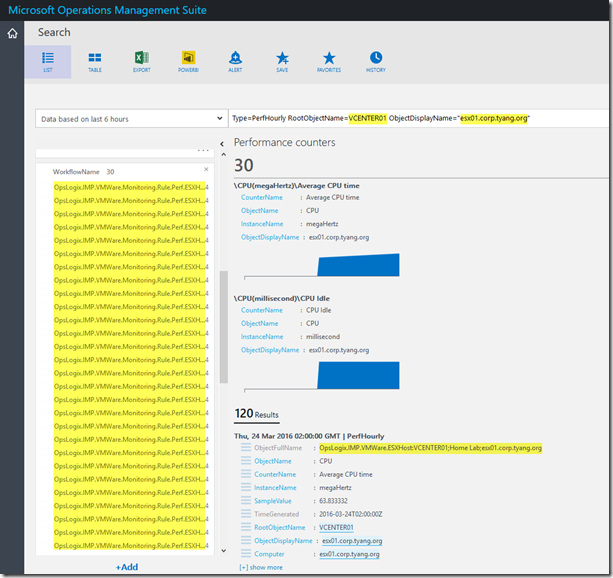 As you can see in the above screenshot, I now have all the VMware related counters defined in the OpsLogix VMware MP in my OMS workspace. the RootObjectName ‘VCENTER01’ is the vCenter server in my lab, and the ObjectDisplayName ‘exs01.corp.tyang.org’ is the VMware ESX host in my lab.

In this post, I have shared a script and demonstrated how to use this script to migrate your existing OpsMgr performance collection rules to OMS. We can easily write a very similar script for migrating existing event collection rules (maybe a blog topic for another day). I have demonstrated how to use this script to collect VMware related counters originally defined in the OpsLogix VMware MP.

In the next post of this series, I will demonstrate how to use OpsMgrExtended module, SharePointSDK module, Azure Automation, Hybrid Workers and SharePoint Online to build a portal for scheduling OpsMgr maintenance mode – this is based on one of the demos in my Azure Automation session with Pete Zeger from SCU 2016 APAC & Australia.

Until next time, happy automating!